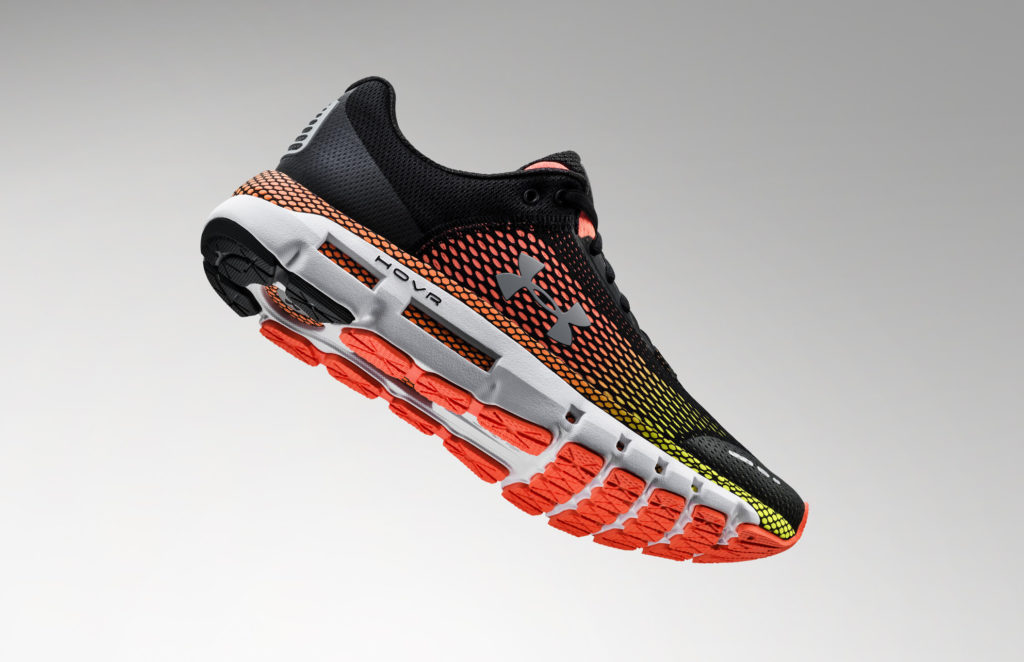 It’s time to get connected in the running world, and in the case of the HOVR Infinite from Under Armour that means digitally tuning-in to a high-tech shoe with embedded sensors which enable you to track your pace, distance, duration and speed. These veritable Bobby Dazzlers do catch the eye and despite a bulky appearance – the sole has the thickness of what our Rock ’n’ Roll-loving forefathers called ‘Brothel Creepers’ – they’re actually comfortably lightweight and well cushioned without feeling clunk

That doorstep depth of the base and the ‘Infinite’ title emphasise the fact that this edition of the HOVR range is a shoe built for the long haul. As such I took it for a few endurance sessions along the Thames towpath to test the feel and try out the techie fixtures and fittings.

But the relatively mild winter conditions to date mean it’s hard to say for sure how the breathable mesh upper will perform in the wet.

The USP of this UA shoe lies deep within – and that component has its Pros and Cons. An accelerometer (movement sensor) in the shape of a 30g transmitter the size of a 10 pence piece is fitted in the midsole of the right shoe. The data it records is beamed, via Bluetooth, to the MapMyRun app. (But not to STRAVA – which is one of several down-sides to this otherwise adventurous and innovative product.)

These shoes will also only ‘talk’ to the map app when it’s on a smartphone – though plans are reportedly afoot to eventually sync it with Garmin and Apple watches.

Those who can tune-in to this future of footwear will reap the rewards of a shoe that records and stores running metrics as well as giving feedback on cadence and stride-length via real-time readouts. The sensor battery lasts as long as the shoe and – according to the makers – isn’t affected by pounding through puddles.

On the plus side, syncing the shoe with MapMyRun takes mere moments and the range of HOVR tech on offer includes a lighter Velociti version for speed and tempo runs.

Under Armour is certainly breaking new ground with the technology these shoes employ. But one’s own sensors are picking up on the fact that there are technical restrictions and consumer choices in apps and hardware that’s counting against them.